Key Concepts: Osteology I (The Forelimb) 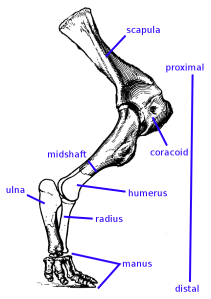 Osteology is the study of bones. Recognizing that not everyone here is completely familiar with all of the relevant names and features, this post will cover a brief tutorial of limb osteology and terminology in dinosaurs.

Broadly speaking, anatomists usually divide the skeleton into three sections: cranial (the head); axial (the vertebral column and ribs, although embryological and evolutionary histories mean that parts of the skull are sometimes lumped in here); and appendicular (the limbs). Presently, we’re only interested in the latter.

The appendicular skeleton includes forelimbs and hind limbs. Let’s start at the front in this post, and work back in a subsequent post. But before we start that, we need to introduce one more set of terms: proximal and distal (see image for their context within the forelimb). This just refers to the position along a structure relative to the main part of the body. Proximal is close to the body, and distal is away from it. Considering the humerus (upper arm bone), the elbow is at the distal end and the shoulder is at the proximal end. Within the entire leg, your toes are at the distal end and the thigh bone is at the proximal end.

The forelimb includes the pectoral girdle as well as the limb bones themselves. In dinosaurs, the pectoral girdle includes a scapula, a coracoid and a sternal plate on each side. Humans have scapulae too (most of us know them as “shoulder blades”), but our coracoids have shrunk down to little nubbins (the coracoid processes) that are fused onto the scapulae themselves. We also have clavicles (“collar bones”) as part of our pectoral girdle, but ornithischians lack this bone (although theropods preserve part of it in the furcula, or “wishbone”). In all adult ornithischians, the scapula and coracoid are fused together, and the area where they meet forms the glenoid, or shoulder socket. If the bones are fused, their total combination is then called a “scapulocoracoid.”

The humerus (or “upper arm bone”) fits into the glenoid. It’s a long bone, expanded at both ends for various muscle and bony attachments. Lots of muscles—including the famous deltoids, lats, biceps, triceps, and pectoral muscles—attach here. The “midshaft” of the humerus is exactly that – the point at the middle of bone.

A pair of bones – the ulna and radius – form the forearm. They articulate with the distal end of the humerus. They’re pretty simple, rod-like bones in most cases. The ulna usually has a process (i.e. a sticking-out bit), called the olecranon, at its proximal end for attachment of the triceps muscle.

Finally, we have the hand – more properly called the manus (Latin for “hand,” strangely enough). The manus has carpals (wrist bones), metacarpals (joining the wrist to the digits), and phalanges. Each digit (or finger) is numbered starting at the thumb. The thumb (innermost digit, for ornithischians) is I (note the Roman numeral), the index finger II, middle finger III, ring finger IV, and pinkie V.

The most proximal elements within the manus (just distal to the ulna and radius) are called the carpals. They’re often just cartilage, and even when ossified are rarely preserved (they tend to float away if the skeleton becomes disarticulated). At any rate, they’re usually non-descript little round elements in ornithischians, and we’ll pretend these bones don’t exist for the purposes of our study. 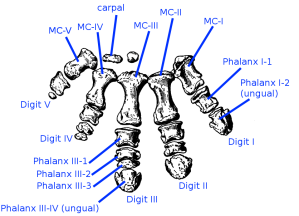 Right manus of the horned dinosaur Centrosaurus (modified after Brown 1917)

Next, we have the metacarpals. If you squeeze the palm of your right hand between the thumb and index finger of your left, these are the bones you’re feeling. The number of metacarpals is variable in many dinosaurs. Humans, and most ornithischians, have five metacarpals (and hence, five fingers in most cases). Most theropods have fewer. “Metacarpal” is often abbreviated as MC. So, the first metacarpal would be MC-I, and so on.

Finally, we come to the phalanges. A single element is most properly called a phalanx (not a “phalange,” although this archaic spelling is not technically incorrect – many older publications use the terminology). The phalanges are numbered by digit (I-V) as well as their position relative to the metacarpals (given by an Arabic numeral). For instance, I-1 is the first phalanx on the first digit, and III-2 is the second phalanx on the third digit. The second-to-last phalanx is sometimes referred to as the “penultimate” phalanx.

The distal-most (terminal) phalanx is often modified into a hoof or claw. These specially modified phalanges are usually called unguals, but they are numbered just the same as regular phalanges. Even if the third and final phalanx on the third digit is a huge claw, it’s still called manual phalanx III-3.

Finally, we should mention the sternal plates. These odd bones (probably equivalent to the sternum, or breast bone, of mammals) are usually floating at the front of the chest wall. The sternals sometimes look like kidney beans (in ceratopsids) or hatchets (in other ornithischians).

It’s a blizzard of terms, but a little practice should help you become completely conversant with all of the parts of the forelimb. In an upcoming post, we’ll tackle the hindlimb. Don’t worry – many of the concepts are the same!

This entry was posted in Key Concepts, Tutorials and tagged osteology. Bookmark the permalink.

16 Responses to Key Concepts: Osteology I (The Forelimb)